Ecstasy is an illegal drug, lethal drug patented in Germany before World War I and most often associated with large dance or rave parties. It is a hallucinogen structurally similar to both amphetamine and mescaline and not tested on humans until 1970s. The drug is also known as MDMA or 3, 4-methylenedioxymethamphetamine readily available and teens can easily buy it on the street.

Why is Ecstasy Addictive?

Ecstasy pills may contain a number of chemicals that may be addictive. Of these chemicals two most common addictive drugs found in ecstasy pills are amphetamines and caffeine. Tests performed by the EcstasyData.org found that less than 0.1% of tablets contained opiates.

Ecstasy had become a club drug in the U.S., and other parts of the world by mid-1990s. Gradually with the increased prevalence of addiction, a dangerous trend has become pervasive and in some cases proving fatal. Those who are already addicted attempt to prolong the effects of the drug by using multiple doses in one night or combining Ecstasy with other drugs or even alcohol.

There is a long list of symptoms mentioned in various sources for Ecstasy withdrawal. Some of the symptoms are listed below: 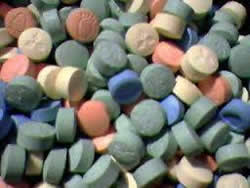 How to Find Ecstasy Rehab

Few centers exist that offer exclusive treatment for Ecstasy addiction, however many of the drug rehab centers offer treatment programs for people addicted to Ecstasy.